Review "Not another bad date" 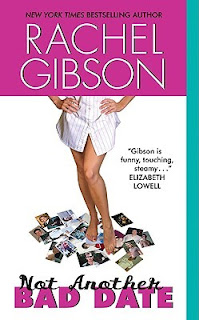 WHAT DOES A GAL HAVE TO DO TO GET A GOOD DATE IN THIS TOWN?
Adele Harris can't even begin to answer that question. She's had so many lousy dates that she's sure she's cursed. Why else would every man she goes out with suddenly act like he's lost his mind--and his manners? Adele thought life couldn't get any more confusing . . . until she learns the marriage of her seemingly Miss Perfect sister is on the rocks. So she goes back to their hometown to give her a shoulder to cry on, only to run smack into Zach Zemaitis . . . the one who got away.

TEXANS LOVE GOD, FAMILY, AND FOOTBALL, THOUGH NOT ALWAYS IN THAT ORDER
Zach, a former pro star, knows all about football. As for the other two, well, he's doing his best. But when Adele comes charging back into his life--still all lush curves and beautiful, big blue eyes--he wonders if his best is good enough. After all, he did her wrong. Can a woman with her track record ever really believe that he's serious this time . . . or is he destined to be another bad date?

A "New York Times"-bestselling author delivers the fourth installment of her series about four writer friends and the messes they get into when they decide to try out the wild side of life. Original.

What can I say? I always like a good chicklit... I can even say I need this kind of books from time to time, just to feel good ^^. Rachel Gibson succeeded again and let the reader behind with a good feeling and the idea everything will work out after all. The strange thing is Gibson always writes books I really love, though the concept is always the same. Especially in the four "writer friends" books. Every single time we find a woman not looking for love but finding it nevertheless and that in the person she least thought about... Every time it's a relationship with ups and downs but everything ends well of course.

In "Not another bad date" we meet Adele Harris, the last of our four writer friends without a husband. She isn't looking for a man in her life because she believes she's cursed. Every man she meets, turns out to be an smdfqie#mjfmioezq ;) so it seems better to stay alone. When her sister Sherilyn is pregnant and her husband leaves her, she decides to move back to the town they came from. Because of some complications Adele feels she needs to accompany her sister but she doesn't like the idea very much. She once left this town because of the single boy she truly loved in her life, Zach Zemaitis. The single boy she loved but also the one who broke her heart in a thousand pieces when he left her for his pregnant ex-girlfriend, Devon.
As this is a chicklit book, it's only normal Adele and Harris meet again and both of them discover that the thing they once had isn't quite over... Though Adele desperately (hmmmm) fights to get over him and to not fall in love, she fails big time... I think you know what happens next, but to be sure you'd better read the book ;) 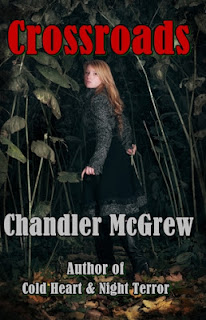 Sheila Bright talks to the dead including the ghost of her mother who wants to move to California. Kira Graves produces money out of thin air and can transform people into monsters. The two of them, along with Shape Shifters, Pookas, Lost Boys and more all inhabit the Crossroads, where good and evil collide. When Kira’s family and everyone else in their carnival are murdered by unearthly creatures called Grigs, Kira and her constant companion, Jen, flee toward a half-mythical place of safety called Graves Island, but they fail to reach it when Kira is drawn through the looking glass into another world. The planet of the Creators is deteriorating from a land of dreamscapes into one of nightmares, and the only way to stop the Empty-Eyed Man from turning the entire universe into chaos is for Kira to destroy the tool he most desires. But what she must sacrifice to do so may be worth more to her than the prize.

I have to admit I don't normally read this kind of books with all kinds of supernatural elements. After reading this book, I discovered again why I don't. It's just not my genre. I like stories that could really happen. Nonetheless I liked this book and this story. It's very well written and author Chandler McGrew doesn't waste time on unnecessary scenes. That's a thing I highly appreciate. Something that did bother me from time to time were all the comparisons the author made. The words "it was a lot like..." appeared one too many times.

In "Crossroads" McGrew tells us the story of Kira Graves, a young girl that grows up with her parents in a carnival. Kira has a pretty normal life (at least that's what she thinks) untill one night everything changes for her. When her parents and all the other carneys are killed by a horrible "thing" one night, Kira doesn't know what to do and is left all alone in the world. The only "person" she has by her side isn't real and can't be seen by everybody... The last thing her mother told her was that Kira would be punished for something she didn't do and that she had to go without looking back. Not understanding Kira begins a life changing journey with her "pooka" or protecter Jen (the one that can't be seen by everybody). On this journey Kira discovers a lot about herself. She seems to be able to create things out of nothing and doesn't really know why she's got this "gift" or how she must use it. She meets Sheila Bright on her journey who also seems to be a little "odd". Indeed Sheila also has a strange gift, though she rather thinks of it as a curse. She's able to talk to the dead and just like Kira she doesn't know what to do with this ability.
Together Kira and Sheila discover a lot of things they didn't want to discover at all. They visit worlds they'd rather avoid and meet creatures that shouldn't have been created.

I have to admit I came more into the story when it reached its climax. I wanted to know what would happen next and that's a good thing when you read a book... Duh... A thing that bothered me (aaargh) was that my version of this book didn't have a page numbering. It almost drove me crazy (only exaggerating a little :p )! The lay-out still needs some work, but we all know the story is the most important part of a book so I won't say something more about this.

All in all it's a good story but I think you have to be a fan of this genre. You can see the author has put a lot of effort in this book, so we can only be positive on that part... What I liked were the philosophical ideas that appeared from time to time in "Crossroads". I don't know wether the author did this on purpose or it's just a coincidence, but it gave a little more to this book. Though I "only" gave 3 stars to this work, I can recommand it to (some) readers. I'm sure lots of people will really like this book a lot!