It has been a while since I wrote something on my blog other than a review. It's time for a Book Haul. I know I'm a little late with my haul for July, but I'm gonna do it anyhow.

Like so many people I'm on sort of a book buying ban. "Sort of" because I know I'm not able to stop buying books completely. It's just... I have so many unread books... I don't even have place for them anymore. I hope I'll have my own home soon so I can buy a huge bookcase!

Here is my haul:

Ibiza: paradise for the clubbers, hedonists and sun-seekers, but for Honey Ballantyne it is the only home she has ever known. With the responsibility of running a hotel on her shoulders, and two hippy-dippy parents whose idea of a hard day's work is a yoga class without their clothes on, Honey feels trapped. When her first love, Edouard, returns to the island from London and truths about her parents start to unravel, Honey is forced to realize that before she can make decisions about her future she must reconcile herself with the past . . .

Hahaaaaa even if I would've been on a BBB (Book Buying Ban), it's not forbidden to swap a book, is it? I found this book in our hotel while we were in Greece this summer and you could just take it. They had an entire shelf with books left by tourists and you could just grab one and take it with you. Yay! I liked it! I'm not sure this book will be completely my style, but I'm planning on finding that out as soon as possible.

2. How to fall in love by Cecelia Ahern

She has just two weeks. Two weeks to teach him how to fall in love – with his own life.

Adam Basil and Christine Rose are thrown together late one night, when Christine is crossing the Halfpenny Bridge in Dublin. Adam is there, poised, threatening to jump. Adam is desperate – but Christine makes a crazy deal with him. His 35th birthday is looming and she bets him she can show him that life is worth living before then.

Despite her determination, Christine knows what a dangerous promise she’s made. Against the ticking of the clock, the two of them embark on wild escapades, grand romantic gestures and some unlikely late-night outings. Slowly, Christine thinks Adam is starting to fall back in love with his life.

But has she done enough to change his mind for good? And is that all that’s starting to happen?

I read the blurb of this book in a little folder our local bookstore always gives when you buy something and I liked it straight away! It looks like the kind of book I won't be able to put down. I'm really looking forward to read it, but the last month I let fait decide wich book I read next. I made a TBR jar (To Be Read jar) and pick a new paper out of it every time I finish a book. Hopefully I'll pick this one soon!

3. Take a chance on me by Jill Mansell

Cleo Quinn doesn't have the greatest track record when it comes to men, but now Will's come along. Handsome and attentive, he could be her Mr Right. Things are definitely looking up for Cleo... apart from one small problem with a rather large ego. Johnny LaVenture, sculptor extraordinaire and her personal childhood nemesis, is back in Channing's Hill and tormenting her as if he'd never been away.

Meanwhile Cleo's sister Abbie has a problem of her own-husband Tom has become distant and withdrawn, and she's determined to find out why. But will the shocking truth mean the end of their idyllically happy marriage?

The sisters are about to discover that the past can come back to haunt you, and that love can flourish in the unlikeliest of places...

A deal where you buy 3 Jill Mansell books and only pay for 2 of them... I could NOT let this pass. Mansell was the author who introduced me to chick lit and I will be grateful for ever! Though I already have a lot of her books, I could find three more of them without a problem...

4. To the moon and back by Jill Mansell

The gorgeously indulgent, funny and touching new novel from the bestselling author

When Ellie Kendall tragically loses her husband she feels her life is over. But eventually she’s ready for a new start – at work, that is. She doesn’t need a new man when she has a certain secret visitor to keep her company...

Zack McLaren seems to have it all, but the girl he can’t stop thinking about won’t give him a second glance. If only she’d pay him the same attention she lavishes on his dog.

Moving to North London, Ellie meets neighbour Roo who has a secret of her own. Can the girls sort out their lives? Guilt is a powerful emotion, but a lot can happen in a year in Primrose Hill...

5. Good at Games by Jill Mansell

Suzy fell for Harry the moment she showed him her husband's sperm sample. It didn't really belong to her husband though because she wasn't married, and the sperm sample was really just the dregs from her milk carton, but when you're trying to get off a speeding charge, you have to improvise, right?

It's 43 B.C., Porcia is dying. Marcus Junius Brutus's wife has cancer and she considers suicide. But first she'll put her life on paper and writes everything down. She takes the reader to her happy marriage where everything has something to do with the struggle between Brutus and his biggest political rival Julius Caesar. Porcia bluntly reports the murder on this powerful ruler and the evolution afterwards.

In "Porcia, wife of Brutus" Van Beuningen shows her facination for the ancient times: with her typical historical precesion she makes ancient Rome accessible through a political love story.

Since I'm a teacher in Latin and Ancient Greek, it's normal I always look out for books about these languages, cultures, countries,... I saw this book by accident in a cheap book store. It's a store with second hand books and new books that didn't sell too good. If I wanted this book, I had to act than and there because next time it would'nt be there anymore. I know, this sounds like an excuse... Maybe because it is one :p Hehe!

To be honest I don't know a lot about Porcia or Brutus. Maybe that's the reason why I wanted to read this book. It's always nice to discover new things!

7. The war that killed Achilles: The true story of Homer's Iliad and the Trojan War by Caroline Alexander

The dramatic events of the Trojan War are legend?but Homer's epic poem, Iliad, is devoted entirely to a few mundane weeks at the end of a debilitating, waning ten-year campaign. The story's focus is not on drama but on a bitter truth: both armies want nothing more than to stop fighting and go home. Achilles?the electrifying hero who is Homer's brilliant creation?quarrels with his commander, Agamemnon, but eventually returns to the field to avenge a comrade's death. Few warriors, in life or literature, have challenged their commanding officer and the rationale of the war they fought as fiercely as did Homer's Achilles. Homer's Iliad addresses the central questions defining the war experience of every age. Is a warrior ever justified in challenging his commander? Must he sacrifice his life for someone else's cause? Giving his life for his country, does a man betray his family? Can death ever be compensated by glory? How is a catastrophic war ever allowed to start?and why, if all parties wish it over, can it not be ended? As she did in The Endurance and The Bounty, Caroline Alexander has taken apart a story we think we know and put it back together in a way that reveals what Homer really meant us to glean from his masterpiece. Written with the authority of a scholar and the vigor of a bestselling narrative historian, The War That Killed Achilles is a superb and utterly timely presentation of one of the timeless stories of our civilization.

Same reason as book number 6. I'm just interested in all these subjects. I adored the IIiad at University. We had to read it entirely and scant every sentence. It was great to find hidden meanings and links with other stories. I loved the mythical creatures and the great loves in this book. The hatred int it was less "loveable", but it made the book so you can't really hate the hatred... If you understand what I'm trying to say :p

8. The England of Jane Austen by Karin Quint

Since this book is Dutch, I couldn't find an English blurb. It's one of my favorites of this month as I'm a Janeite in heart and soul. This book is like a travel guide and takes you along the house of Jane Austen, the places where she stayed in her life (or where her family lived), the Jane Austen Centre, houses that served as film locations in the many adaptations... It's soooooo cool to have this book and I can't wait to visit all these places. I also hope I'll be able to visit the Jane Austen festival in Bath once in my life (or more) :p.

9. And here are the books I received to review. A big thank you to the authors! I will read your book soon :) 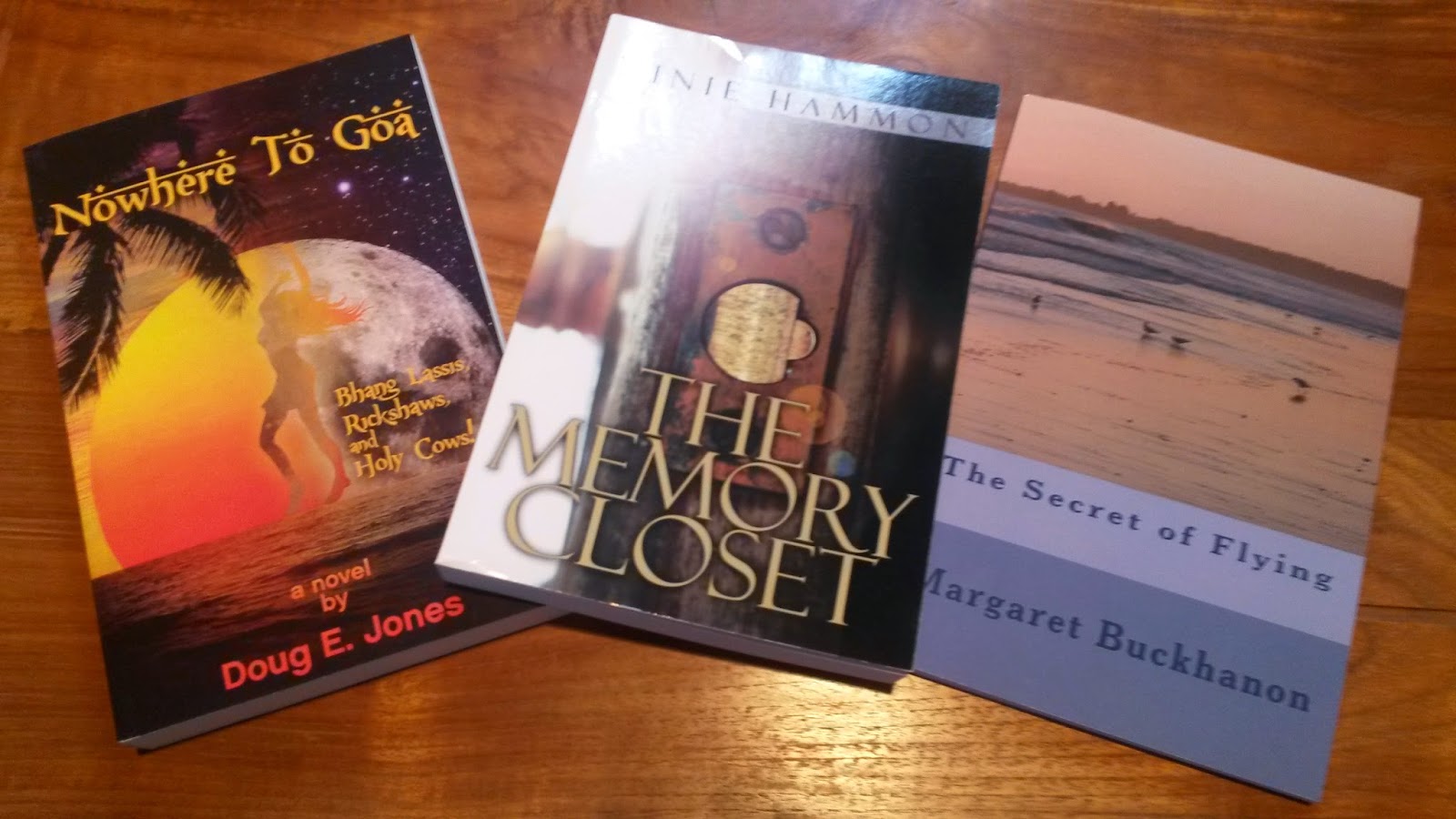 9a: Nowhere to Goa by Doug E. Jones
9b: The Memory Closet by Ninie Hammon
9c: The secret of flying by Margaret Buckhanon

Thank you for visiting my blog and I hope you have a great book haul too for July! If you have read one of the books above, it would be great to know what you thought of it. :)